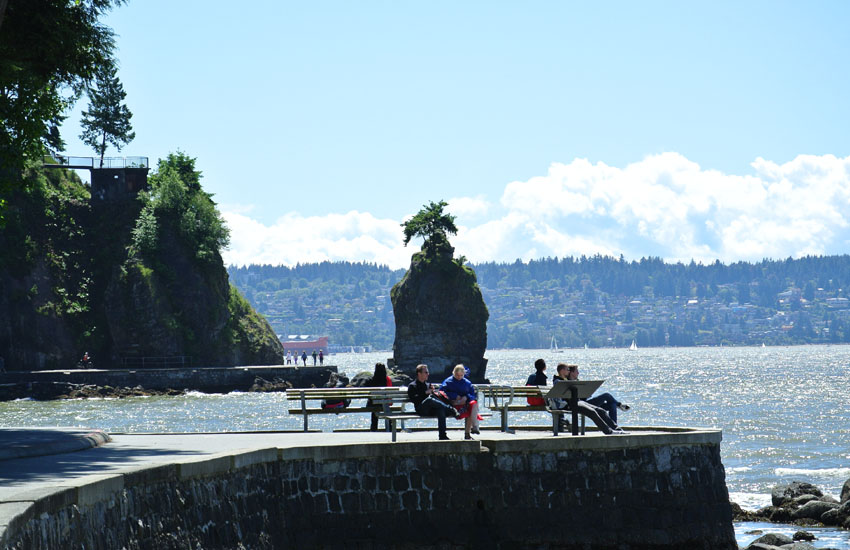 For tourists heading to Vancouver, BC Stanley Park is a “must see”.  This 1000 plus acre park is located in the heart of Vancouver bordered by Burrard Inlet and English Bay.

Stanley Park is named after Lord Stanley 16th Earl of Derby who was appointed Governor General in 1886 when the City of Vancouver was first incorporated.  If you’re a sports fan then you may also recognize the name Stanley since Lord Stanley also has the honour of being the namesake on the National Hockey League’s top prize, the Stanley Cup.

In June 2014 Trip Advisor named this amazing piece of land “top park in the entire world”.

The park is home to thousands of trees, some of which are hundreds of years old and as tall as 250 feet (76.2 meters).  Included in the park are trails, beaches, lakes, play areas, swimming pools, restaurants, a miniature railway and the world renowned Vancouver Aquarium.

The park is surrounded by the “Seawall”, a 14 mile (22.5 kilometer) walk path.  The world’ longest unbroken waterfront walkway. Construction of the seawall began in 1917,  completion came decades later.  It was the brainchild of, the then Parks Board Supervisor, W.S. Rawlings who believed that this was the only park in North America which could combine such a large park and marine walk.

Thousands of people were involved in the construction of the seawall.  In particular, James Cunningham, a master mason,  gave 32 years of his life laying bricks from 1931 until 1963.

If you enjoy walking, cycling, running or roller blading you’ll enjoy the seawall.  Every mile of this incredible path will provide you with plenty of beautiful scenery.  On a sunny day, you could spend hours just trying to take it all in.

Depending on where your viewpoint is, you could see the North Shore mountains, an incredible coastline, one of the largest urban colonies of the Great Blue Herons in North America, the Lions Gate Bridge, native totem poles, downtown harbour (bustling with sea planes and cruise ships) and views of English Bay with the setting sun.

Stanley Park itself is home to many famous landmarks, such as Lost Lagoon, Siwash Rock, Prospect Point, the 9 o’clock Gun, Lumberman’s Arch, the Lions Gate Bridge, the Vancouver Rowing Club, the Mermaid Statue (which is actually a girl in a wet suit), the rhododendron garden (with over 5,000 rhododendrons), the rose garden, the Shakespeare Garden, Malkin Bowl, Brockton Point Lighthouse, a variety of artists, horse drawn carriage rides and more.

No matter where you look or which direction you travel, there is something for everyone in Stanley Park. Don’t forget your camera!