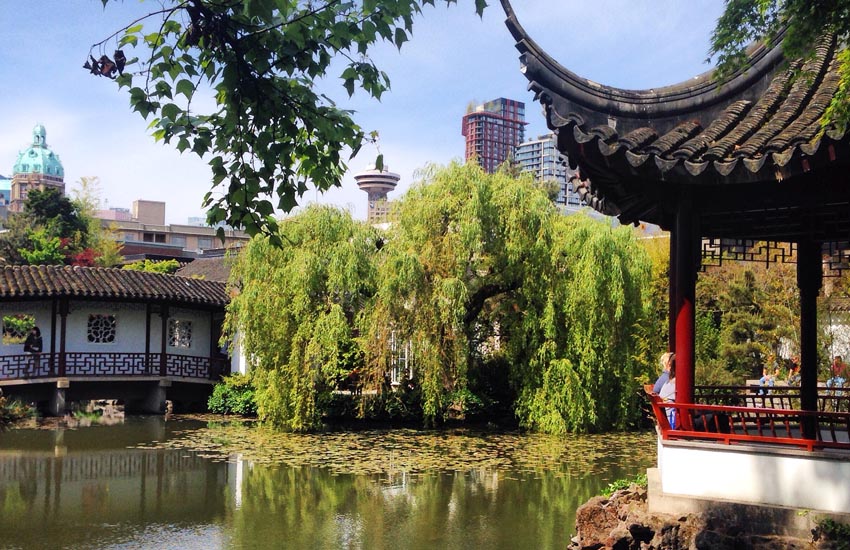 Back in the 1880’s when the C.P. Rail Line was trying to make its way into British Columbia, over 10,000 Chinese labourers were brought in to help complete the line.  From 1881 to 1885 many of them settled in the small area, close to the C.P. Rail yard and made Vancouver their home.

With the busy rail line, major saw mill and ample other labourer jobs available, this was the beginnings of what is now called China Town.  For well over 100 years, Vancouver’s China Town has been going strong, though not without its share of hard times.

From its humble beginnings in the 1800’s to the residential boom era of the early 1900’s along with the very depressing time of the 1923 Exclusion Act and of course the great depression of the 1930’s, China Town has had its share (or more) of struggles.

Designated a Historic Area in 1971, today’s China Town offers a rare mix of old and new.  It’s a place where age old tradition meets modern day technology.  Today, China Town offers a unique trip through time, from the completely refaced “Millenium Gate” to the century old Sam Kee building and everything in between.

Whether you’re sightseeing, shopping, browsing or looking for some fantastic places to eat, Vancouver’s China Town has what you’re looking for.

Here are a few must see’s while on your walk, bus tour or private tour.

Named one of the world’s top city gardens by National Geographic, it was the first classical Chinese Garden of its kind to be built outside of China.  Built in 1986 for Vancouver’s Expo ’86, this stunning, tranquil garden located in downtown Vancouver is home to a wide variety of old and new.  You can contemplate life on a quiet bench or take in some of the historic Ming Dynasty artifacts on exhibit here.  With such a mix of both ancient and modern Chinese culture, you are sure to be initrigued.

Mystery, games, investigation programs, as well as an extremely unique collection of recovered weapons and oddities are all on display here.  There’s also a nice touch of erie, seeing how its home was once the city morgue.

The Guiness Book of Records calls this the narrowest commercial building in the world.  With a width of less than 1.8 meters (6 feet), it’s quite surprising to find out that the basement actually extends well into the street and was once home to some very infamous public baths.

Something that surprises most, if not all visitors to China Town is the shrine to the left handed, guitar playing, rock star, Jimi Hendrix.  His grandmother worked here and every time he would Vancouver, he would spend much of his time here with her.

In 1999, the China Town Historic Area Planning Committee started sponsoring programs to improve and brighten up China Town.  With such things a murals, specially paved sidewalks and the only red lamp posts in the city (which also have dragons on them!)  Some of these improvements were not only to add more obvious traditional elements but also to mark its borders for both tourism and local businesses.

There are over 20 historic buildings in China Town, some dating back to the 1880’s.  There is also a major shopping center, bordering on China Town.  International Village is a 300 thousand square foot mega mall.  An ultra modern facility that not only hosts Chinese businesses but also some popular brand stores and a major multi-theatre movie complex.

You could shop for antiques or t-shirts, hand carved jade our souvenir stickers. China Town has high-end merchandise as well as low end knickknacks.

Some of the best tea shops in all of Vancouver call China Town home.  You can take your time sipping and tasting tea in one of the many traditional tea houses.  Herbs and traditional medicine shops abound.

China Town has many restaurants, from first class dining to small noodle houses including some of the best Dim Sum you’ll ever taste.    There are banks, fresh produce, butcher shops, high-end clothing, low end clothing and even a tailor shop that’s over a century old!

If you’re lucky enough to visit China Town during one of its three yearly festivals, then you will have some truly wonderful memories.

If you’re heading to Vancouver, then you definitely won’t want to miss Canada’s largest, most colourful and truly historic China Town.