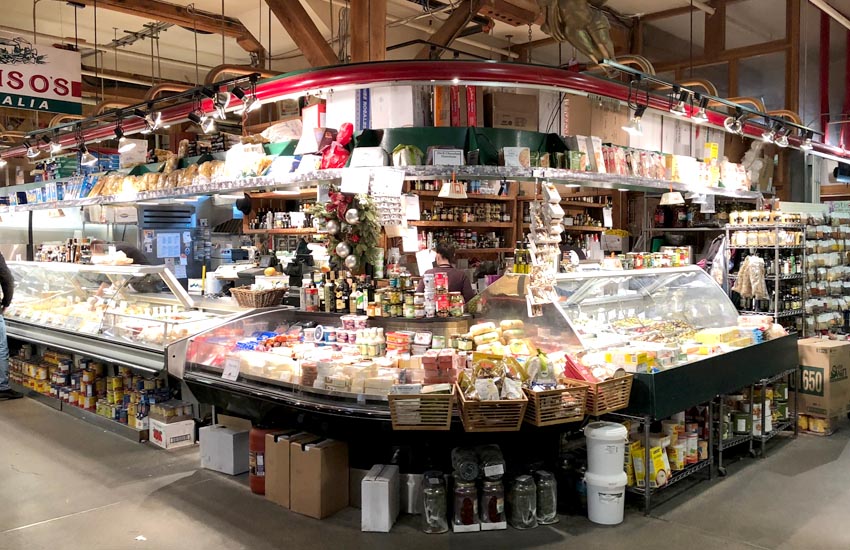 Granville Island is without a doubt one of the top attractions in Vancouver and not only for tourists, but for residents as well.  This historic site was originally used by First Nations people as a fishing area.

The City of Vancouver, once known as Granville until it was renamed in 1886 for Captain George Vancouver, first tried to fill in the marshy land in 1889.  The early attempts at reclamation were stopped by the Federal Government of the time.  They felt that all the pilings needed were a hazard and a menace to navigating ships.

In 1915 the newly formed Vancouver Harbour Commission approved a reclamation plan that would create a 14 hectare (35 acre) island.  A gentleman named Alvin Kingston was responsible for most of the 760,000 cubic meters (1,000,000 cubic yards) of fill that was dredged from the surrounding waters of False Creek.  The total cost of land reclamation was $342,000, quite a massive sum at the time.

False Creek was named by George Henry Richards, on a voyage he believed to be on a creek at the south side of Burrard Inlet.  When he soon come to the “end” of the creek, he realized it wasn’t a creek at all.  He called it a “False Creek” and the name stuck.

The project of reclamation was finished sometime in 1916.  What were once mud flats, was now ready for businesses and in early 1917 the first business, B.C. Equipment Ltd.,  opened. The company repaired and assembled equipment for the mining and forestry industries.  One of their original wooden framed, corrugated tin buildings is still there.  It currently houses part of the public market.

By 1923 virtually every lot on the island was filled and almost all were the same wood and tin structures as first built by B.C. Equipment.

Originally named “Industrial Island” for obvious reasons, it was renamed for Granville Leveson-Gower, 2nd Earl Granville.  The bridge directly above the island was named Granville as well, so the name seemed to make sense and was much easier for the locals to remember.  It also sounded much better to most people than “Industrial Island”.

Granville Island’s oldest tenant is by far Ocean Concrete.  It opened its doors in 1917, only a year after the island was officially opened.  In 2014, the Pandolfo brothers created one of their famous murals, in this case, two murals.  “Giants” was painted on two huge concrete silos and today this is one of the most photographed buildings on the island.

Granville Island wasn’t actually an island until the 1950’s when the city of Vancouver decided to fill in the south channel that once created the island.  Once back filled, access to the island was much easier and safer for larger and heavier vehicles.

Granville Island managed to survive the Great Depression and World War II, but these and other events really took their toll on the businesses.  Once home to the largest manufacturer of heavy duty wire rope as well as some of the largest forestry and mining equipment shops in the country, by the 1950’s businesses on the island were really struggling.

For over 30 years, Granville Island survived as an industry based island but as the years went by there were less and less businesses.

Fast forward to 1979 when the Federal Government donated a 50,000 sq. foot building to the public market.  This was the real beginning of the “Granville Island Public Market”.

In the late 1970’s, along with the new market, the island’s very first green space was added.  What started out as a rather huge pile of fill or “garbage” was cleaned up and then covered with top soil and seeded with grass.  This “park” was named after Ron Basford, the then minister largely responsible for the new look of Granville Island.

In 1980, Emily Carr University of Art & Design moved their campus to Granville Island.

In 1984 the “Kid’s Market” was opened.  Granville Island is now home to over 25 shops and has a few pretty amazing buildings located within its borders.   These include the over 100 year old factory and it’s two annex buildings and another island favourite, the old train caboose.  During the summer, there is also the largest free children’s water park of its kind in North America.

With approximately 300 businesses supplying over 2500 jobs and over 10.5 million visitors per year, Granville Island alone is currently responsible for 215 million in economic activity per year.

The public market itself is just as popular with locals as it is with tourists.  With everything from produce, fresh meats and seafood, delis of every description, fresh cut flowers, baked goods, candy, cheese, pasta, snack food, organic food, ethnic goodies of every description it’s no wonder the City’s top chefs can been seen shopping here.

Along with this one stop, one of a kind market, the island is also home to an incredible variety of craftsmen, artisans and just generally amazingly talented people.  You will find hand crafted jewelry, blown glass, old world fudge, woodworkers, welders, painters, potters, carvers, toy makers, breweries and you can even watch authentic First Nation totem poles being carved right in front of you.  It’s even home to the first artisan sake brewery in Canada.  There are people making incredible clothing, bath products, knick knacks, furniture and even handmade brooms!

If shopping isn’t your thing, there are also live theatres, fine art galleries, marinas, street performers and Vancouver’s one and only improv theatre.

Did I mention the food?  Granville Island is known as the “Foody’s Paradise”.  They have vendors from almost every ethnic background you can think of as well as fine restaurants, lounges, pubs and bistro’s.

Granville Island is home to some of the best festivals the city has to offer such as the “Children’s Fest”, the “Writers Fest” and the amazing “Vancouver Fringe Festival”.

You can drive in, walk in, taxi in or you can even take one of the water taxis they offer.  False Creek Ferries and Aquabus offer services to Downtown Vancouver, Yale Town, the Westend and Vanier Park.  You can even hop on a water taxi for a day trip to Bowen Island.

I’m pretty confident when I say “You will without a doubt, find something for absolutely everyone on Granville Island”.

Take your time and enjoy every inch of this historic icon of an island.  Granville Island is a beautiful way to spend a day exploring.