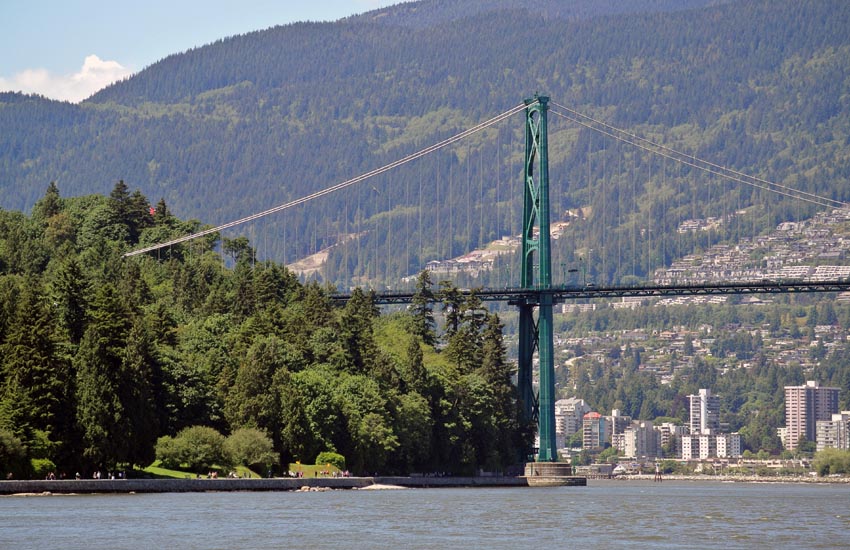 As well as world class dining, skiing, fishing and one of the largest intercity parks in North America, Greater Vancouver is also home to some very beautiful and interesting bridges.

The Lions Gate Bridge opened in 1938 and was named the “First Narrows Bridge”. It wasn’t until 1939 when an artist placed concrete lion statues on each side of the South end of the bridge that people started calling it the “Lions Gate”.  The lions were in honour of the mountain range just to the North of the bridge, these well known hills are known locally as the “The Lions”.

This gorgeous old suspension bridge cost about 5.75 million dollars and only took a year and half to build.  A 25 cent toll was charged until 1960 when the then privately owned bridge was sold to the Province of British Columbia.

On a sunny day or a clear evening, this is an absolutely beautiful bridge and a must see on your visit to Vancouver.    You are able to walk, ride your bike or drive over the bridge.  No matter which direction you’re travelling, there is something to see.

If you walk or bike up to the center of the bridge and just look around, you will enjoy a 360 degree view that is simply stunning.  You’ll see the North Shore mountains (including The Lions), the Pacific Ocean, West Vancouver’s coast line, North Vancouver’s coast line, East down Burrard Inlet, Stanley Park and the water front of Downtown Vancouver itself.

Whether you’re interested in the architecture or the amazing views from the bridge, you will appreciate this unique old bridge.  For a different vantage point, you can also travel under the bridge without renting a boat.  The South end of the Lions Gate Bridge’s sits over the tip of Stanley Park known as Prospect Point.    There is an amazing path around the perimeter of Stanley Park known as the “Sea Wall”.  The Sea Wall runs directly under this National Historic Site Bridge and offers yet another amazing view of the old steel bridge.

In 2000-2001 the entire deck was replaced and all the main structural elements were moved below the road deck to give the bridge a larger, more open look and feel.  This also allowed for slightly wider lanes and a much wider pedestrian crossing.  It’s only from below that you can appreciate the state-of-the art engineering involved in building this bridge.

The bridge is just as beautiful at night with its thousands of lights shining along its cables.  These lights were privately sponsored by the Guiness family who originally built the bridge.  The lights were officially lit on February 19, 1986 just in time for Vancouver to hold “Expo ‘86”.

The lights were nicknamed “Gracie’s Necklace” for the then MP Grace McCarthy.

In July 2009 the lights were upgraded to LED lights.  This reduced electricity consumption by 90%.  This update was done just in time for Vancouver to host the 2010 Winter Olympics.

So whether it’s a bright sunny summer day or a beautiful winter night, this is an absolutely beautiful bridge and in my opinion a must see on your trip to Vancouver.