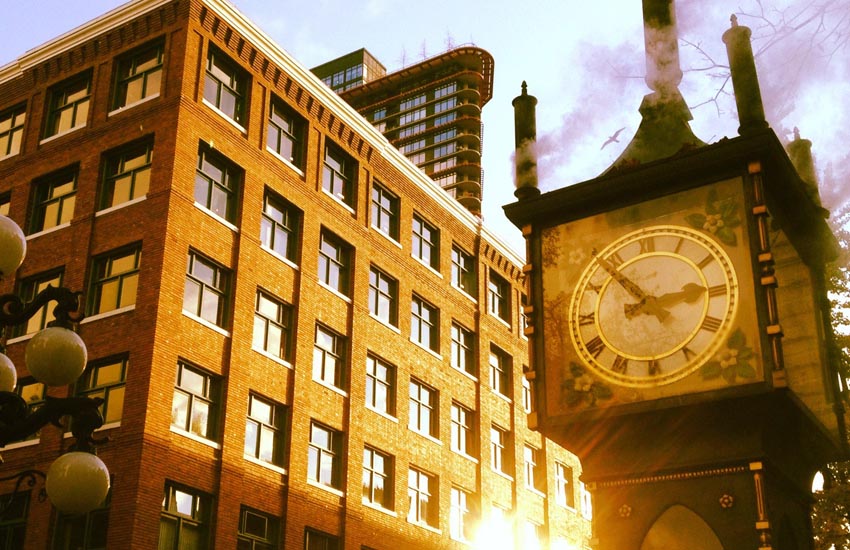 The story of Historic Gastown started back in 1867 when a Yorkshire seaman named “Gassy” Jack Deighton arrived to open a saloon.  Already, the site of the Hastings Mill Sawmill and seaport, the little area started to thrive as a business district.

There were fishermen, steamship crews, lumberjacks, railroad workers, warehouse workers, mill workers and more “shady” characters than you could shake a stick at.

As a waterfront location, it soon became a bustling hub for wholesale produce going in and out of Vancouver, North Vancouver and West Vancouver.  The local steamships and ferries all had docks there as well as the Canadian Pacific Railroad Station.

Right up until the depression era of the 1930’s, it was also the drinking capital of Vancouver and was said to have had over 300 licensed liquor serving establishments in the tiny 12 block area.

After the depression, Gastown and it’s surrounding areas got left behind, leaving nothing but a few beer parlours, flop houses, cheap hotels and a whole lot of unemployed men.

It wasn’t until the 1960’s that some concerned folks started to think seriously about preserving what was left of the historic area including many of the Victorian and Romanesque buildings, the cobblestone roads and other historic structures.

Luckily for all of us, they did.  Today the historic cobble stone streets, once referred to as “Blood Alley”, is now home to the some of the best browsing, shopping, pubs and restaurants in the whole city.  “Blood Alley” as it was once referred to, was home to dozens of fresh butchers.  It was said that on certain days you could see blood running down the cobblestone gutters.  To add to its colourful past, “Blood Alley” was also home to public executions reinforcing the name.

When you come to Vancouver, be sure to visit one of the most popular sites in Gastown, the steam clock.  Known simply as the Gastown Steam Clock, it looks like it just stepped out of the 17 or 1800’s.  It was actually built in 1977 to cover an old steam grate and to stop some of the homeless from sleeping on it during the colder weather.  Today, crowds gather daily on the hour to hear its terrific steam whistle blow.

You can also pose with the larger-than-life statue of the infamous pioneer himself “Gassy” Jack Deighton.  The statue of him, fittingly perched atop a beer keg, was erected in 1970 as a Valentine’s Day gift to the city.

If it’s great food you’re after, you’ll find everything from pub lunches to high class dining, hipster cool to top end chic,  Gastown has a large variety of eateries to choose from.

With all of its great architecture and many art galleries, Gastown is truly one of the best spots in Vancouver for browsing and photographing.  There’s also a huge mix of shops and stores for your shopping needs.

Just because it gets dark, doesn’t mean you have to head back to your hotel.  Gastown’s night life is very much alive.  Dancing and good times are everywhere.   Whether its live music or top 40, you can just hang out and have a pint or sit around and sip on a martini.

Visit Vancouver’s Gastown, you’ll be very glad you did.