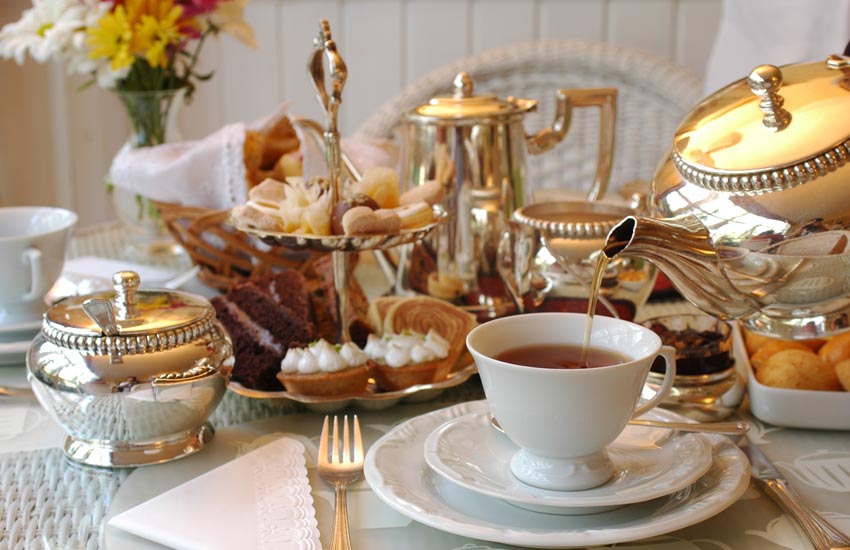 The Reader’s Digest version goes something like this… sometime during the 1840’s, her Grace Anna Maria, Duchess of Beford decided to add a twist to the ritual of afternoon tea.   At the time, it was common to only have two meals a day. She thought that by having tea a bit later in the day, accompanied by some sweet breads or even a small sandwiches, it would be a good way to tide one over to the evening meal.

Once she began sharing her delightful new habit with friends, it soon it progressed into a full-blown social event among the English aristocracy.  While this certainly wasn’t the first record of a late afternoon tea served with a snack of some sort, credit for starting this tradition is quite often given to Grace Anna Maria.

The term “High Tea” however was coined in England, not for the time of day but rather because of the actual height of the dining tables used among royalty and the wealthy in general.  The upper class served their late tea and refreshments on their higher dining tables, rather than a parlour table, coffee table, or even an old crate that the more common folks may have used.

Of course as the tradition grew, so did the menu to include not just expensive teas, but also finger sandwiches, sweets and delectable desserts.  As influential families from different countries started trying to impress one another, High Tea truly become something of an event for the wealthy.  This of course never stopped the common folks from enjoying their own version of afternoon tea served with biscuits, cakes or other types of food.

What does all of this mean for those of you visiting Victoria, BC?

You will have to decide which of the four seatings you’d like to attend between 11am to 5:45pm.

Their incredible menu may include:

Along with an amazing food menu, you’ll have a bit more than just Orange Pekoe and Imperial Breakfast tea to choose from.  They offer 21 of the finest loose leafs teas available from a variety of countries and feature an original blend “The Empress Tea” which is a selection of seasonal, quality teas, created exclusively for Fairmont Empress by the Metropolitan Tea Company.

To make this experience truly extraordinary, you may also order the “Empress Cake”.  This rich chocolate torte, developed in France by pastry chef AJ Thalakkat is topped with a delicious chocolate crown, a replica of the one worn by Queen Elizabeth II.

A few tips to ensure you’ll have the best experience:

From the minute you walk into the grand old hotel until far after you leave, you’ll feel the rich history and tradition that only a truly iconic landmark like the Royal Empress can offer.

In June 2017, the Fairmont Empress Hotel completed a $60 million plus restoration, that added a modern luxury to this already iconic hotel.  Situated in the heart of Victoria’s Inner Harbour, it is nestled among the Royal Museum & Historic Parliament buildings.  It is an absolute must see on any trip to Vancouver.

You will be positively delighted by the amazing architecture, the award winning service, the 100 plus years of experience, the incredible selection of teas, the world famous menu and the truly over the top feeling of just breathing in the atmosphere of this one of a kind experience.

If you are planning a trip to Vancouver, then please do yourself a favour and take the day trip to Victoria and treat yourself to High Tea.  Better yet, make a weekend of it and see all that downtown Victoria has to offer.  CLICK HERE to learn more about High Tea at the Empress