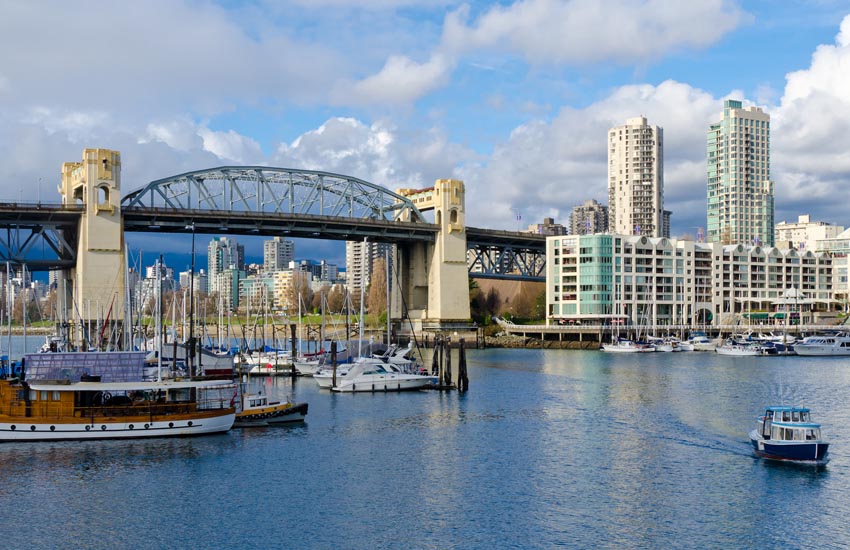 On July 1, 1932 the City of Vancouver and then Mayor Louis D. Taylor opened the Burrard Street Bridge. With one snip of her golden scissors, on that Friday afternoon, the neighbourhoods of Kitsilano were connected to Downtown Vancouver.

The beautiful art deco, steel truss bridge had hardly been opened when thousands of walkers and hundreds of cars hurried to cross the bridge for the first time.

Much like the Lions Gate Bridge, the Burrard Street Bridge also has plenty to see from its deck.  As a matter of fact, the view to the West, English Bay, Kitsilano Beach and the Pacific Ocean were so spectacular that the heavy pierced concrete handrails were uniquely designed to allow motorists a very interesting view. The holes in the handrails were to allow for a stroboscope effect, or an uninterrupted shutter view of the harbour.  If cars were driving between 40km-64km per hour, they were supposed to get the shutter effect on either side of the bridge.  The design worked out perfectly and the same unique view can still be enjoyed today.

Designed by George Lister Thornton Sharpe and engineered by John R Grant, the bridge crossing Vancouver’s “False Creek” was built in under three years at a cost of about three million dollars.

Two of the architectural pieces that stand out the on the main super structures are the busts of Captain George Vancouver on the one side and Sir Harry Burrard Neale on the other.  The beautiful central piers that hold the busts are connected with an overhead gallery crossing the bridge width at each end of the steel trusses.  Mr. Thompson Sharpe said the towers don’t just hide all the steel trusses, but they also add an elegant entrance to both vehicles on the bridge deck and boaters crossing underneath it.

The bridge was also designed with a provision under the road deck for eventual rapid transit of some sort, but it was never used.

This is one inner city bridge that you have to walk across.  Not only for the amazing views of English Bay, Kitsilano Beach, the Pacific Ocean, Granville Island and variety of water craft parked in False Creek but for the sheer architectural beauty and details of the bridge itself.

As a tribute to the Canadian WWI POW’s, John Grant had the idea of installing huge lamps at both ends of the bridge.  These were to honour the soldiers who would gather around open fires in the prison camps to both stay warm and talk about better days.

The historic old bridge has its own postage stamp.  In 2011 Canada Post issued the stamp as part of a set of five art deco structures in Canada.

The Bridge, which ironically doesn’t cross Burrard Inlet was named after Admiral Sir Harry Burrard Neale, 2nd Baronet GCB GCMG, officer in the Royal Navy from Sept 16, 1765 to Feb 7, 1840.  He died at the age of 74 without ever even visiting Vancouver at all.  Captain George Vancouver named Burrard Inlet in his honour in 1792.  Although Harry Burrard never visited Vancouver, his name is very well known by the City residents.

Back in the 1930’s, the city planners never thought there would be a need to dedicate lanes to cyclists.  That thinking changed drastically in the 1990’s and by May 7, 2009 after years of ideas and debates, City council approved a trial of what was then known as “Option 3” for the bridges future.

On July 13, 2009 the Southbound curb lane and the Northbound side walk were both allocated to bicycle traffic only.  The Southbound sidewalk is now the only sidewalk dedicated to pedestrians.

It has not been without its opponents but fast forward to 2018 and bicycle traffic is at an all time high both on the bridge and in Greater Vancouver in general.

No matter what time of year or what time of day, each step of the almost 3,000 foot bridge will offer you something inspiring to look at.